The Perks of Being a Wallflower marks another trend I am a late adopter of. I read the book for the first time last week and saw the movie this weekend. This might not be the most interesting opinion but both completely enthralled me.  The book has been on my goodreads too read list for years, but it was a desire to read the book before the movie that made me pick up the book.

My desire to see the movie was part David Levithan recommending it at the National Book festival, part intrigue based on the very “cool” trailer, and part interest in seeing how Bobby from Jack and Bobby and Hermione would play characters. It is kind of funny to test these child star’s adult acting abilities, in films where they are playing children.

Emma Watson and Logan Lerman pass this strange test with flying colors.  Ezra Miller as Patrick has been particularly lauded in the media, but Logan Lerman as Charlie seemed to me to be the most difficult and successful. The attention is on him the entire film, but from the title to his long letters to “a friend” he is defined by a lack of charisma. Learman walks this line, remaining interesting, sympathetic, relatable, and, yes, a wallflower. In fact, I think his performance adds depths that make the character stronger in the film than the book (there are fewer moments of reader frustration/annoyance).

The closeness of the film to the book, is due to the novel’s author Stephen Chbosky’s role as screenwriter and director. The film is more reflective, while the book is active and in the moment, but they are slightly different interpretations of the exact same story. All of my favorite moments from the book are included.

Another difference is that while the book is firmly set in 1991, the movie seems more timeless. When I told my Mom it was set in the early 90’s, her response was, “I wondered why they were making mixed tapes that way and why the cordless phones were so big.” The clothing, music, haircuts (etc) matched the time, but resisted the urge to be campy and overstated.

Where both the novel and the film intrigues the most is in the tension between contrary elements of success. The protagonist is by definition isolated, but also charming. The story shows an overall sense of ethics, but also contains moral ambiguity and relativism. It exposes the lightheartedness of youth, first friendship and first love – and the depth and weight of young adult life. It is both unique/individual and relatable. I imagine that Chbosky knows not only what is in Charlie’s bedroom drawer. He knows how Charlie thinks about it, and feels about it, and what emotions and memories each item triggers.

I think to say more, would be to give away details of the story – which I want you to discover for yourself. If you want to laugh and feel good about yourself, this is not the book/movie for that feeling (go see Pitch Perfect – it is also amazing and much more light hearted).  But I definitely suggest you read this book and watch this movie if you get the chance. If you do – or you have – let me know what you think! 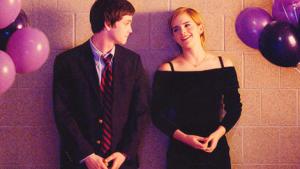