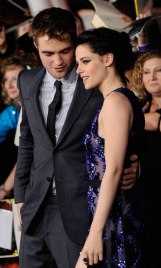 As some of you might know, the whole Kristen Stewart cheating scandal, and ensuing Robert Pattinson break up in July caused me a little distress. In fact, you can read about it in this post. I discovered, that I was not alone in this. In the days following the alarming news, we tried to analyze the relationships chances through messages on Kristen and Robert’s t-shirts, checked people.com hourly for updates, and almost lost it when we heard that Robert was putting the couple’s shared house on the market and was hiding out at Reese Witherspoon …. okay, maybe that was just me.

The close attention didn’t just last for days or weeks. When Robert went on the publicity circuit for Cosmopolis, everyone was watching to see if he would fall apart or give us a clue as to the future of their relationship. He was (perhaps unsurprisingly) mum on the subject. Even though he did look adorable eating ice cream on The Daily Show with Jon Stewart, things didn’t look good.

It surprises me then that as the couple has apparently gotten back together, that people aren’t making a bigger deal. It trickled up last week on a few entertainment cite. This week people.com (I would say a more reputable site, also the cite that broke the break up scandal to begin with) confirmed the rumors. They are back together. The house isn’t being sold.

The surprise in fact has me questioning if they are really back together. I’m crossing my fingers, waiting for the Breaking Dawn premiere … and looking for something healthier to fill my time/interest.