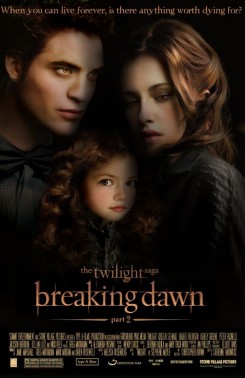 Like any good Twilight fan (yes I know this is embarrassing, but I don’t care!) I spent the weekend having a marathon of all the Twilight movies with my mom before heading to see the newest and last film in the saga “Breaking Dawn Part 2” Sunday morning. Surprisingly, I remembered this part of the books the least. Plus, after the gore and disconcerting number of extreme close ups in its predecessor “Breaking Dawn Part 1” I didn’t know what to expect.

The film pleasantly at the same time met and exceeded my expectations. It has the self referential humor of the other films in the theories and goes beyond the narrative of Stephanie Meyer’s finale to add excitement and produce an ending that pays tribute to all five movies. There are some unexpected twists which I suggest you don’t try and find out through spoilers. Also, it’s pretty fun to see Kristen Stewart not have to be an awkward, hunched over girl who is consistently falling over her own feet. And, as my mother said, “who knew becoming a vampire meant having perfect eye makeup on all the time?” Although, be forewarned the movie contains a CGI baby.

Also the premier of the movie has meant photos of my favorite real life couple back together and more interviews with Robert Pattinson, who continues to be hilarious and tied for me with Lena Dunahm for most unique and charming media interviews. My two favorite interviews for this movie have been his appearances on Jimmy Fallon and Jimmy Kimmel. I also love the number of memes that have popped up on the internet denoting Pattinson’s hatred of the Twilight movies. What’s particularly funny is they aren’t made up, they are pretty much all direct quotes from Rpatz himself.

You can see more at these Tumblrs:

So let me know if you are planning and going to see the film? If you’ve seen it what do you think? Is anyone else anticipating Twilight withdrawals… Who knows maybe Stephanie Meyers will decide she wants another bazillion dollars and decide to write another one.

2 thoughts on “Breaking Dawn 2: The End of the Twilight Saga”