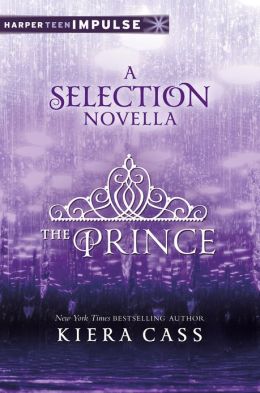 Pretty much ever since I finished The Selection by Keira Cass, I’ve been craving the sequel. To say book ended with a cliff hanger wouldn’t be an understatement, but it would be a completely true statement. It almost seemed to stop mid thought and I was left being like … What is going on with the rebels? Who is Maxon going to choose? Who is America going to choose? It’s been like waiting for the final episode of the Bachelor for a year.

While, The Elite is less than a month away … but I did stumble on The Prince, a novella/prequel to The Selection told from the point of view of Prince Maxon.  While it isn’t really a full narrative, or as well put together as the novel, it definitely sheds some light onto Maxon’s personality, upbringing, and the challenges of royal life.

YA novels seem to be overwhelmingly told from a first person perspective. It is interesting to see another side of the same story. Stephanie Meyer started to do the same thing when she wrote Midnight Sun, the beginning of the Twilight story told from Edward’s perspective. But she left it unfinished and published it for free on the internet for her fans.

I think Cass’ creation is a pretty clever marketing ploy to hype the new novel. But I still enjoyed it.

Perhaps more exciting than the novella, was the first two chapters of The Elite. So if you are in a similar boat and want something to do this weekend, check out The Prince, here, and let me know

One thought on “Something to Read this Weekend: The Prince, A Selection Novel”