The original title of this post was cooking for one … but I decided that would be deceitful, because there isn’t a whole lot of cooking going on in my life right now. But that doesn’t mean I’m not having a lot of fun eating alone. 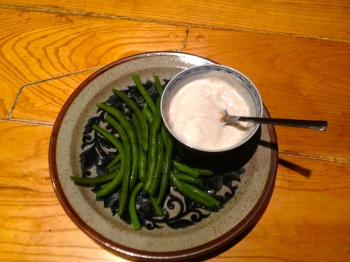 Before when I’ve lived alone I’ve had different strategies to eating for one, both of which involved more cooking. Right after graduating, I cooked dinner for myself every night. That’s what being a grown up meant, and I wanted to be a grown up. Later, living in Virginia I would make one or two big meals to eat throughout the entire week.

Both of these plans worked just fine, but eat had major downsides. Cooking every night just for yourself, seems like a lot of effort for just one person – time that could be spent writing, or blogging, or looking at the ocean. The big meal plan is the most time efficient, but then you have to eat the same thing all week.

Right now I’m doing what I call the “eat what you want to eat when you want to eat it” plan. There is a lot of freedom in my schedule. So if I want to eat meatloaf for breakfast, an omelet for lunch, and cucumber tea sandwiches with the crusts cut off for dinner then that is exactly what I do. In fact that is exactly what I ate today. I’ve also been going to a lot of farmer’s markets and then eating like green beans, or broccoli, or asparagus (which I learned last week to cook in the coolest way ever – you just wrap them in wet paper towels and microwave for 2 minutes).

So now that I’ve thoroughly bored everyone except my mother with my culinary quest towards adulthood, I have a question for you? For anyone who eats/cooks alone or has been in that position before what are your favorite methods, recipes and tips?

5 thoughts on “Eating For One”