To major in English or not to major in English … that is the question. While it was never much of a question for me, it does seem to be something that’s risen in public consciousness in the last two weeks. Just four days after my slightly awkward Father’s Day conversation about if an English major actually translated into any kind of job, David Brooks came to my aid and wrote an op-ed titled The Humanist Vocation in the New York Times. The article discussed how humanities degrees have been cut in half in the last 50 years and exploring the reasoning.

While he wrote about the humanities in general, English majors specifically were soon singled out. Brooks’ article was followed by another editorial in the paper – The Decline and Fall of the English Major, by Verlyn Klinkenborg, a college nonfiction writer who bemoaned the decline in college students’ collective writing skills. A day later, Steve Straus wrote on Huffington Post about why he loved to hire English majors, also citing writing ability as a strength along with boldness and pleasant to be around.

I’ve been felt a personal connection to this recent interest. Because what they are debating is something that could effect my entire life. While like Eugenides’ heroine in The Marriage Plot I chose to be an English major for the pure and dull reasons that I like to read books, now that I’m out of the college bubble the question of if you can make a living after having majored in English is of key importance. And while my present activities (i.e. not working and trying to write a novel) might prove the contrary, I think the question can be answered with a resounding yes. 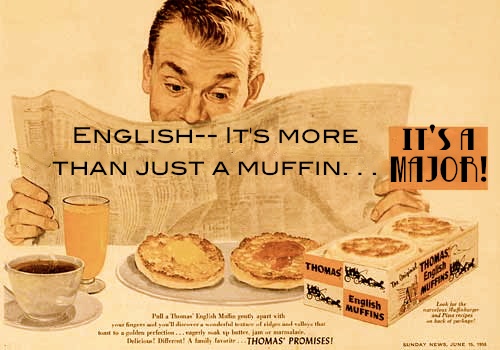 I’m not even going to get into my belief in education for the sake of education or deny that it was kind of scary being in the English Department when traditionally English majorish industries (journalism, publishing, teaching, academia (see above decline of humanities majors)) began to shrink. I even had someone ask me once, and I kid you not, if I planned on teaching high school with my degree or I planned on getting married with it and let me tell you it felt very Laura Ingalls Wilder.

It is scary to graduate without a clear path. When you major in accounting you become and accountant. When you major in marketing you work in marketing. When you major in English you do … nothing/everything and whatever you want/whatever you can get. The path is not clear, but that can be exciting. And I think the ability to fit into multiple roles can actually be a huge asset in a changing economy. In almost every industry, there is some demand for employees who know how to write well and that isn’t going to change anytime soon. And if I’m wrong there is always grad school, which is becoming almost mandatory in many more fields these days.

I think the whole drama of whether or not to major in English is really better argued between idealistic teens and concerned parents than in the media. But if you want my two cents, majoring in English was pretty fantastic. Yes it teaches you to write, read, think, and problem solve. But it also lets you study human nature and learn from characters throughout time.

Because who doesn’t want to look at their future and have the ability to pinpoint what stage of the hero journey they are in or think “what would Coriolanus do?” And then do the exact opposite, of course, because as you can see from the picture, things didn’t work out so well for him. Who knows maybe things would have worked out differently for him if he’d spent less time focusing on his career as a soldier and more time reading.

If you’re still interested check out these great English Major memes. Let me know what you think about these articles or majoring in the humanities in the comments below!

7 thoughts on “In Defense of English Majors”