This guest post comes from Jackie Lea Sommers (@jackieleawrites) a Minneapolis YA writer who rather enjoys stories, cute nerds, and cranky teenagers.  She blogs about creativity and writing at www.jackieleasommers.com. Thank you Jackie!

Seven years ago, a friend and I started a local masochist club writing group.

Let me ask this: just what kind of people think, “Hey, I’ve got a great idea; let’s meet up once a month and shred each other’s work”?

Masochists, that’s what kind.  Masochists—and people who want to be better writers. 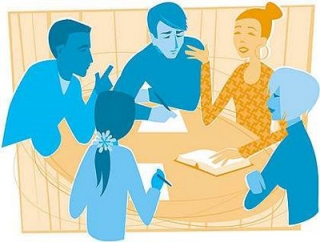 The creative process shouldn’t occur in a vacuum; writing shouldn’t be a solo activity.  As a writer, I can only take my writing to a certain level alone.

I write flagrantly awful first drafts (be honest—you do too, right?) with obscure non-endings and characters who haven’t yet decided whom they’d like to be.  Part of that is just the nature of a first draft, but even after I’ve gone back and polished it, there are still gaping holes that I can’t see until my writing group points them out (“Umm, Jackie, there’s no ending…”).

Over the course of multiple drafts, my writing group draws attention to inconsistencies (“I don’t think he would have said/done that there”) and deficiencies (“We don’t even know if he’s a blonde or brunette”) and slacker-moments (“You can do better than that”) and missed opportunities (“The whole story would be stronger if …).

Finally, by draft one hundred million, it’s there, ready.

My writing group is a mixed bag.  One of my friends is the perennial cheerleader, telling us everything she loves.  One doesn’t mince words, and her critiques are hard to swallow.  One asks for more concrete images.  One wants fewer of them.  The important thing is that there is conversation surrounding your work—a conversation you’re able to participate in and interpret yourself.

Look, it’s never easy to place your writing in the path of critical eyes and minds.  And the actual critiques slice the heart a little; it’s akin to having people tell you that your newborn is ugly.  But the difference here is that you can do something about it.

The good thing—which might not sound like a good thing at first—is that when your heart gets nicked enough times, it begins to scar a little.  And in a good way.  You build up a thicker skin—and better yet, you develop discernment and intuition.

There are really only three parts to the writing process, three little blocks that, when stacked over and over and over, form the shape of a story:  writing, feedback, and re-writing.

Don’t hide from that middle element; run toward it.

10 thoughts on “Guest Post: A Good Kind of Scar”