Two weeks ago I wrote about the verb to be plaguing me. Now the monkey on my back is obsessing over my WIP’s (work in progress) word count. Word count has always been a bit of a sore subject for me. I always felt like my short stories came out too long and in my previous two attempts at novel-writing they’ve come up too short.

I’ve spent many hours over the years googling how long a novel should be. Most of them say things like “there is no should” and “however long it takes to tell your story”. I can’t think of anything less helpful. I appreciate the bloggers give number ranges, but this information is often contradictory. Some say a novel is never less than 70,000 words. While others insist on somewhere between 50,000 and 60,000 for a first time author. Short of taking my favorite novels and physically counting the words, I’ve been at a loss to answer this question (which lets face it is probably just a tricksy form of procrastination). Until I discovered AR Book Finder, a site that will give you the word count for almost all novels. 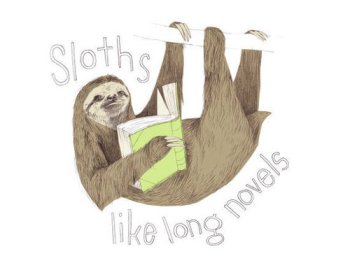 My current WIP is young adult, so I compiled a somewhat random list of YA novels by debut authors and looked up the book’s word count. Here is what I found (in order from least words to most words).

So, as expected, there is a huge range. Also for the nit-picky some of these might be considered Middle Grade not YA – but you get the picture. Overall the experience of looking these books up calmed me down about the whole word count thing. My WIP is hovering between 69,000 words and 71,000 words at the moment, which feels like it is on the low-end of the middle.

As I delete truly terrible sentences and add in details to overly stark scenes this word count might change. All I really know at this point is (1) that it will be longer than a one sentence story and shorter than this guy’s 3,500,000 word piece of fan fiction about Nintendo video games, and (2) that I need to get back to editing and stop looking up the word count of books.

What do you think? Do you prefer longer or shorter novels? Are there any books you are going to go look up the word count of?

Quick note on using AR Book Finder: You will be asked to say if you are a parent, teacher, librarian or student. All answers lead to the same thing. I said I was a student, because that felt the least like lying. To get the word count you have to click on the title for the more detailed summary. Enjoy!

57 thoughts on “Word Count and YA Novels”