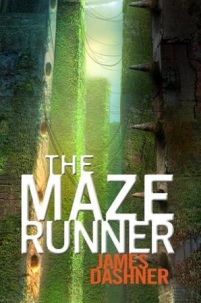 Early in The Maze Runner, by James Dashner, one boy looks at Thomas (the main character) and says “If you ain’t scared, you ain’t human.” Thomas has just arrived in a strange landscape called the Glade in a metal box. The only thing he remembers is his name. The Glade if full of teenage boys who’ve arrived one by one each month. They don’t know why they are there or where they are. They don’t know who put them there. But they do know that the only way out is through the maze. The problem? The walls of the maze rearrange every night and no one has ever made it out alive. Just like one of the boys tells Thomas, I will tell you (with slightly better grammar) that if you aren’t at least a little scared while you are reading this book, than you probably aren’t human. Just my opinion!

That is not to say that the book is all about suspense, violence, and fear. It is incredibly compelling, but it is more a logic puzzle than a thriller. The reader’s internal response to the landscape mimics Thomas’s. But in someways the reader and Thomas aren’t looking for answers … both are looking for the right question to ask. Should Thomas and the other boys in the glade be focused on getting out of the maze or surviving within it? Who put them in the maze and why? What social responsibility do the boys have to each other?

When the first girl comes up to the Glade through the metal box with a terrifying message the questions will only intensify. Especially because Thomas feels a connection to her that he can’t remember or understand.

These questions will keep you turning page after page, but be wary of any answers the book seems to give you. Again and again while reading I thought I had something “figured out” only to be given a new detail that made me question everything going on within the book.

I’ve wanted to read this book for a long time, because of the movie adaptation coming out in the fall and the fact that it is basically part of the YA cannon. Still, I didn’t expect to enjoy it or become immersed in the plot nearly as much as I did. Thank you so much to all the readers that recommended this to me!

5 thoughts on “Book Review: The Maze Runner, by James Dashner”