Earlier this summer I sped my way through E. Lockhart’s Ruby Oliver Boyfriend List series. These books were quick favorites and stood up to multiple rereading. They felt realistic, funny, meaningful – everything a favorite book is supposed to feel like. As a result, I had incredibly high hopes for We Were Liars, especially considering all the hype the book got over this summer.

My hopes weren’t disappointed, but the book certainly isn’t what I expected.

In stark contrast to Ruby Oliver, who is honest to the point of TMI, you will immediately understand that Cadence Sinclair Easton, the We Were Liars narrator isn’t as reliable. For starters, she has amnesia. Two years before the start of the book she suffered an accident she can’t remember and no one else with discuss.

Secondly, the opening lines where Cadence describes her fabulously wealthy and privileged Sinclair family – “No one is a criminal. No one is an addict. No one is a failure.” – practically dare you to think that perhaps Cadence doth protest too much. If everyone is so perfect why even bring those things up?

Finally, the title is We Were Liars. The Liars turn out to be Cadence, her two cousins, Johnny and Mirren, and Gat the outsider (racially, genetically, economically) who spends summers on the Sinclair family’s private island on Martha’s Vineyard. Both the title of the book and Cadence’s group don’t exactly inspire confidence.

This creates great tension and suspense, but Cadence’s memory problems kept me from understanding or connecting to most of the other characters.  It shows a world of privilege, but I don’t think it says anything particularly relevant or unique about it. It also was missing the humor I think that Lockhart writes so well.

In the what I liked column, I think the beautiful and extremely quotable language takes the number one spot. The book also weaves in some great allusions to King Lear, Wuthering Heights, and the Brother’s Grimm fairy tales. I also couldn’t help thinking of my favorite John Cheever short story “Goodbye, My Brother.” 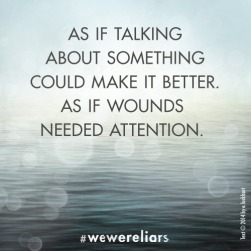 As you can tell, I have mixed feelings about the book. I think the New York Times got it right when they summed it up through the word ambitious. Some of Lockhart’s ambitions it achieves … others didn’t work as well for me. I felt incredibly impressed, but I didn’t feel in love – the way I have with Lockhart’s other books. If you’ve read the book let me know what you thought in the comments. I’m really intrigued to hear what other people think.

6 thoughts on “We Were Liars, by E. Lockhart”