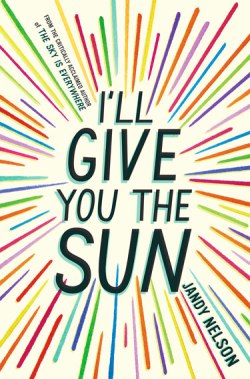 If you read I’ll Give You the Sun, by Jandy Nelson, with the hope of finding one singular or dominant theme of the novel then I wish you good luck. I don’t think you will be able to. Art. Family. Blame. Death. Grief. Fidelity (in many different senses). Love. Coming of Age. I could go on. These themes aren’t all simply present. They all play major roles in the narrative and interweave with each other in interesting, unique, and relatable ways.

Similarly, I’d wish anyone looking to examine the book through a single literary trope good luck. Except this time I would know, not simply think, that this would be an impossible task. Twins. First Love. First Sex. Mother-son adoration. Mother-daughter jealousies and strife. Misunderstood, moody artists. Supernatural interventions from kooky, deceased relatives. Once again, I could go on. But just like with the multiple themes, there is nothing that feels common or over-used when it comes to Nelson’s manipulations of these tropes. They are subverted and twisted to fit this thoroughly unique story in both enchanting and unexpected ways.

Now that I’ve established that if you are looking for a simple narrative or reading of a book I’ll Give You the Sun probably isn’t something you should pick up, I’ll try and list a few of the many many reasons you should read this book. And I’ll try to be a little more convincing than just saying because it is one of my favorites from 2014! Even though that it definitely true.

As the back of the book will tell you, this story is told through the alternating narration of fraternal twins Jude (female) and Noah (male … but that’s obvious, right?). Both are artists, although Noah’s always taken his art more seriously. Both have adoring, but complicated relationships with their mother. Both view the other as a half to their collective whole. As the narration states, they aren’t Noah and Jude or Jude and Noah. They are NoahAndJude. One entity. Their differences don’t jeopardize this connection, they enhance it. Jude is brave and brassy and does the talking for both of them. Noah is the pair’s moral compass.

Noah’s sections are told from when they are thirteen. They are still inseparably close, although he’s spending more and more time with the neighbor boy next door, coming to terms with his sexuality and sexual orientation. He paints every chance he gets and their mother is encouraging both of them to apply to a prestigious local art-based high school.

Jude’s sections are told from when they are sixteen. Jude is in art school. Noah is not. Noah has a girlfriend. Jude is on her third year of a boy boycott. And the two of them are barely speaking.

This is the question that both Jude and the reader spend the novel trying to figure out. The interplay of Noah and Jude’s chapters creates a great tension, as does the fact that none of the characters know the whole story of what’s happened to their family and what forces have influenced both twins’ artistic development.

The story Nelson tells is magical (once again in many senses of the word), but in my opinion the writing surpasses the narrative. It is lyrical and relatable and like nothing I’ve ever read before.

I know that I almost always gush about books when I’m reviewing them (I still don’t exactly see the point about talking about a book on my blog if I’m not at least a little in love with it), but I really really really mean it when I say that this is a book all lovers of YA should read. It will take your breath away and leave you wanting more immediately. Couldn’t recommend this one any more.

14 thoughts on “Book Review: I’ll Give You the Sun, by Jandy Nelson”