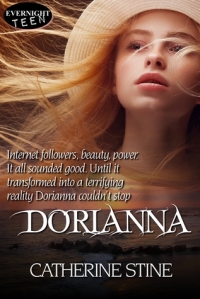 A few people who’ve been reading my blog for awhile know that last summer I wrote a first draft of a YA retelling of A Picture of Dorian Gray. I’m not doing anything with it now, and I don’t know if I’m ever going to look at it again, but that writing experience and the fact that I’m a big Oscar Wilde fan made me really excited to read Dorianna, by Catherine Stine. As you can probably tell by the name, and my opening remarks, this is a contemporary YA retelling of the same novel. And while it was very very different from my re-imagining, the concept intrigued me from the start.

Dorianna is a plain girl that’s sent to live with her aunt in Brooklyn after her father – a minister – is sent to jail for stealing from his parishioners. Being in New York feels like an exciting fresh start, but Dorianna feels trapped when boys overlook her and the cool girls bully her and make her feel like a country bumpkin. On a trip to Coney Island she meets Wilson, a videographer, who offers to make her a viral Youtube sensation for a price. Disillusioned by her father’s religious hypocrisy she willingly offers up her soul, assuming it is a joke. But she soon discovers that the bargain she made is no laughing matter.

While, I enjoyed the plot arc and the twist on making the Dorian character female, I didn’t connect with this novel as much as I originally hoped. The pacing felt somewhat off to me, and it got a little too repetitive and detailed in describing the clothes Dorianna was wearing, the way she was doing her hair, and every aspect of her party planning. Furthermore I didn’t really connect with Dorianna. I didn’t understand why she wanted to be an Internet star or a party planner, instead of just wanting to be popular at school or have friends or have the boy she liked reciprocate her feelings.

This book got really dark, really fast – demons and powers and things like that. This definitely added to the story’s readability. And I will say, despite my reservations, by the last third of the book I was pretty hooked trying to find out how Dorianna’s story would end.

So yeah, for me this one wasn’t a home run, but I can definitely see it’s appeal for other readers. Especially if they are fans of Oscar Wilde’s original story.

*I received a review copy this book through NetGalley in exchange for an honest review, but all the opinions here are my own.