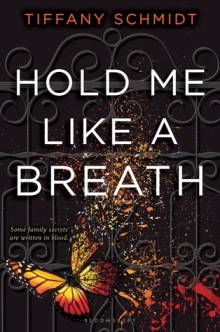 When I picked up Hold Me Like a Breath, by Tiffany Schmidt, I was expecting a very different story than the one spelled out on these pages. Somehow the teaser of fairy tale retelling, left me with images of pretty dresses, princesses, and fanciful language. I was wrong, but I was not disappointed. There are echoes of The Princess an the Pea in this story, but there’s also illness, black market organ selling, murder, and betrayal. Which, let’s face it, is equally if not more compelling than the fantasy images I approached the book with. The story follows Penelope Landlow. Her father is the head of one of the three crime families that controls the black market organ transplants. She has body guards and has never been anywhere by herself. She is almost never touched by anyone (not even her parents!) because of an autoimmune disorder that makes her bruise at all but the lightest of touches. See the princess an the pea connection?

She’s treated like a princess, but all she’s wanted is to be on her own, have life of a normal teenager, and maybe even ditch the private tutors and go to a regular school for her senior year. But when she finds herself entangled in a dangerous struggle between the three crime families she gains more independence than she thought possible and ends up losing more than she could have imagined.

This book is definitely grittier than I expected. I probably spent the first 50 pages feeling like “whoa this isn’t want I thought I was going to be reading at all”, but then I got over it and got sucked deep deep into the story. The suspense will definitely keep you turning pages. Aside from some very dramatic things going on in Penelope’s life, there is also a sense that you don’t know which characters are good or bad. I found myself gasping in shock at a twist more than once (by which I mean twice) while I was reading.

If you like suspense or want a wholly original and unique fairytale retelling I suggest you pick this book up immediately. I can’t wait to see what the author does with this series.

*I received an e-arc of this novel through NetGalley in exchange for an honest review, but the feelings and opinions expressed her are my own.

6 thoughts on “Hold Me Like a Breath, by Tiffany Schmidt”