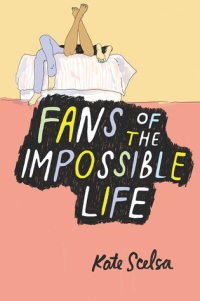 When I finished Fans of the Impossible Life, by Kate Scelsa, all I could think was wow. I wasn’t sure what I thought about the characters – even though they were unique and fully drawn. I wasn’t sure how I felt about the ending. I was sure that I was incredibly impressed with this book.

The story switches perspectives between Jeremy, Mira, and Sebby, three teens with hard pasts who find an escape in friendship (and sometimes more than friendship!) with each other … at least for a little while. As Mira starts over at a new school, Sebby (Mira’s gay best friend) tries to work through family issues, and shy shy Jeremy gets drawn into their co-dependent friendship the three learn about the secrets and stakes involved in the quest to live what they deem “the impossible life”.

Probably the thing that stands out the most about this book is how the author handles to POV switches. Jeremy’s perspective is told through first person, Mira’s in third person, and Sebby in the very rare second person. You might think this would come off as a gimic, but somehow it totally works for the story. I definitely felt the closest with Jeremy, which makes sense both in terms of his character and because of the closeness that comes along with first person narration.

This book has been compared to Perks of Being a Wallflower and there are definitely similarities between the tones of the two books. Issues of sexuality and sexual orientation, mental illness are explored, but ultimately I think this book is about trusting other people with your heart and accepting friendship. Another great YA debut to come out this year!

Has anyone else read this one yet? What did you think?

2 thoughts on “Fans of the Impossible Life, by Kate Scelsa”