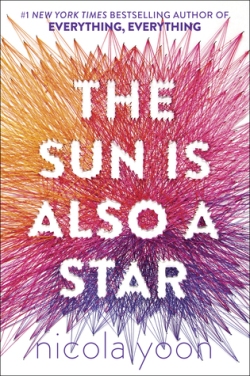 This book got me out of a serious, post-election reading slump and is exactly what I wanted/needed to be reading. The Sun Is Also A Star switches between the perspectives of Natasha, Daniel, and the universe (including a few of his many inhabitants). Natasha is a science obsessed girl who doesn’t believe in love, destiny, or fate. She’s an undocumented immigrant brought to The United States from Jamaica at age eight. In twelve hours, her family will be deported. Daniel is the child of Korean immigrants. He has always been the good son. He wants to be a poet, but his parents want him to go to Yale and become a doctor. When the two meet by chance, the attraction and connection between them is undeniable – although logical Natasha does her best to deny it. The book takes place over twelve hours as they get to know each other and try to keep Natasha’s family from being deported.  It is a detailed, emotional, romantic story that I absolutely couldn’t put down. I started and finished it in one sitting.

Content-wise, it was so lovely and unique to read a story about immigrants that was more of a romance than an issue book. Natasha’s potential pending deportation gives the story and their budding romance dramatic stakes. Both Natasha and Daniel’s family stories are full of nuance and complicated emotions. Although Daniel’s older brother is almost too horrible to be believed – which isn’t exactly a spoiler because the numerous ways he sucks are listed right at the beginning of the story.

This New York City love story is not to be missed! I have mixed feelings about the ending, but otherwise this is a close to perfect book and one of my favorites from 2016. I feel so lucky to have Nicola Yoon writing contemporary YA right now and can’t wait to read whatever she comes up with next.

4 thoughts on “The Sun Is Also A Star, by Nicola Yoon”