In July, I wrote about reading more “adult” books. Recently, I’ve been reading a lot of middle grade – and not just because I’m behind in my goal to read 100 books this year. Young Adult is definitely my one true love in the book category world. But I can muster up some serious feelings for middle grade as well. I mean, Harry Potter... Need I say more? I will admit that sometimes when I’m reading MG I crave a little more  little more excitement or romance moving the story forward. Other times, reading about middle school kids is exactly the zone I want to be in. Here are a few middle grade books I’ve been reading and loving in the last two/three weeks. All are fantastic stories and approach diversity in interesting and important ways.

Ghost has a crazy natural talent, but no formal training. If he can stay on track, literally and figuratively, he could be the best sprinter in the city. But Ghost has been running for the wrong reasons—it all starting with running away from his father, who, when Ghost was a very little boy, chased him and his mother through their apartment, then down the street, with a loaded gun, aiming to kill. Since then, Ghost has been the one causing problems—and running away from them—until he meets Coach, an ex-Olympic Medalist who blew his own shot at success by using drugs, and who is determined to keep other kids from blowing their shots at life. This book, and it’s main character, totally blew me away. I know it’s cliched to say that I both laughed and cried – but’s it’s true. Ghost goes on an emotional journey in this book and a physical one. I grew up with a lot of privilege. I know it’s good for me (and everyone) to read books like this, and Jason Reynold’s voice as an author is a thing of magic.This was one of my favorite books of the year and definitely deserved to be on the National Book Awards short list! 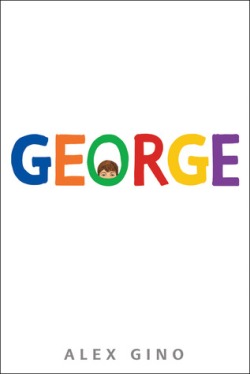 When people look at George, they think they see a boy. But she knows she’s not a boy. She knows she’s a girl. George thinks she’ll have to keep this a secret forever. Then her teacher announces that their class play is going to be Charlotte’s Web. George really, really, REALLY wants to play Charlotte. But the teacher says she can’t even try out for the part . . . because she’s a boy. With the help of her best friend, Kelly, George comes up with a plan. Not just so she can be Charlotte — but so everyone can know who she is, once and for all. This is another book that feels very important to exist. I don’t know if it’s the first MG book to openly talk about a trans character, but it’s the first one I’ve read. While there is a lot of practical information in these pages, the story is definitely paramount. I particularly loved how the main character is a big reader and the important role the book Charlotte’s Web plays in the plot.

Joe and Ravi might be from very different places, but they’re both stuck in the same place: SCHOOL. Joe’s lived in the same town all his life, and was doing just fine until his best friends moved away and left him on his own.Ravi’s family just moved to America from India, and he’s finding it pretty hard to figure out where he fits in. Joe and Ravi don’t think they have anything in common — but soon enough they have a common enemy (the biggest bully in their class) and a common mission: to take control of their lives over the course of a single crazy week. Sarah Weeks, the coauthor of this book, was one of my teachers at The New School – but I don’t think I’m biased when I say I loved this book. The structure of alternating chapters is used to perfection in setting up the differences and similarities between these two boys and their lives. A lot of the difficulties and injustices Ravi faces as a new immigrant were things I hadn’t considered before, as a former student or current teacher. Ravi and Joe’s (slight spoiler alert) journey towards friendship is filled with details, nuance, and humor. Also this cover is amazing!