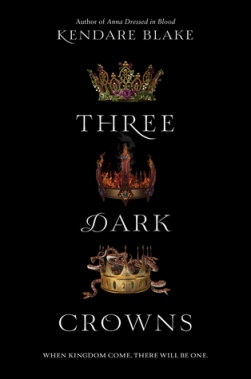 I’ve been been reading more and more fantasy this year – I think maybe because now I’m writing contemporary? A friend recommended Three Dark Queens, by Kendare Blake, when I was putting together this list of 100 books about sister relationships for Book Riot. The list turned me on to a lot of good books about sisters that I hadn’t read before, but so far this one has been my favorite. And I’m not alone! I’ve been delighted to see this title pop up on several “best of 2016” lists. It’s darker and a little scarier than what I normally read, but the characterization, suspense, and world building totally won me over!

The book switches perspectives between the three young queens: triplets borns once a generation on the island of Fennbirn who are equal heirs to the throne and possessors of magical powers. The triplets are separated from ages six to sixteen when they fight to the death. The last sister standing wins the crown. Mirabella is a powerful elemental, controlling the weather with fierce power. Katharine is raised by poisoners, who expect her to eat the deadliest poisons without being affected. Arisnoe is a naturalist, meaning she should be able to control plants and animals.

The problem? Katharine and Arisnoe have been faking their powers. Also Mirabella remembers her early childhood with her sisters, which isn’t supposed to happen. Alliances. Betrayal. Love. Lust. Revenge.

Now can you see why I was hooked from almost the first chapter?

The thing I liked best about reading this book is how my allegiances and sympathies kept shifting between all three girls. I couldn’t pick just one to root for, even though part of me knew I had to. All three characters are flawed and nuanced, and all three seem in desperate need of love and connection. The romantic aspects of this book weren’t shabby (at all) either – even if they were all complicated. Very complicated.

As I alluded to above, the world building in this book also blew me away. From the deep historical and political alliances/customs to the setting description, the island of Fennbirn seemed unique, real, and, well, magical. Both the setting and the magic rules reminded me of a series – also about magic sisters – that I read and loved in high school called The Dark Queen Saga.

This is just the first book in a series, or perhaps a duology (?), so don’t expect everything to be wrapped up by the last pages. Do expect a rich world, complicated emotions, and at least a few cringe-worthy moments. Although I’m a bigger wimp than anyone I know – so you all will probably be fine with the spooky stuff!