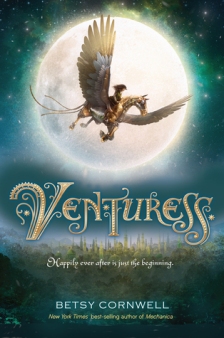 Betsy and I met in college, but even though I had a big friend crush on her I was way too shy to talk to her much. Then I reached out about how much I loved her first book Tides and an online friendship sparked into being. In another life, we are roommates conquering the NYC publishing world together and drinking beers on the weekend at The Way Station. But since she lives with her dreamy family in Ireland, I have to settle for some of the kindest, most supportive emails a friend/aspiring writer could ever ask for. Betsy’s third book Venturess is out today. It is the sequel to the badass, feminist Cinderella retelling Mechanica and my very favorite thing that Betsy’s written so far.  Expect a (glowing!) review soon. But for now, Betsy was kind enough to answer some questions for me…

How long did it take for you to write Venturess and do you have a consistent writing routine?

I started writing Venturess in September 2015 and finished it on April 1st the following year (I sent it to my editor seven minutes before my deadline!). I wrote a good portion of the first draft during National Novel Writing Month, an event that always helps ramp up my daily word count.

I wish I had a more consistent writing routine than I do! When I’m drafting, I aim for at least 1,000 words per day and try to get my writing done as early in the morning as possible. That way I feel accomplished, instead of guilty for procrastinating. But . . . I still do procrastinate an awful lot. I think being a working writer is about somehow combining the discipline to keep hacking away at a project with the ability not to beat yourself up if you don’t always meet your goals. I try my best to do both those things, with varying degrees of failure.

When you were writing Mechanica did you know you wanted to work on a sequel? When did the story for this book come together in the writing/publishing process?

I originally pictured Mechanica as the first book in a trilogy. However, I quickly learned that as an up-and-coming writer, I was more likely to sell a “standalone book with series potential.” It’s a big financial risk for publishers to buy a whole trilogy from an unknown author.

So even though I reworked the first story as a standalone, there are a couple major reveals in Venturess that I always knew about when I was writing Mechanica. They’re spoilers, but if you’ve read the book you’ll know what I mean!

The story takes place in two settings, Esting and Faerie, and I’d once pictured those settings as two separate books. I sometimes worry that I didn’t leave enough space to explore and explain everything in Venturess, but I am also trying to work on being a more concise writer. It was good for me creatively to work what I thought was two books’ worth of plot into just one. I wanted this book to be faster-paced, too, so having a little extra story to get through definitely helped with that!

Venturess is the last book that focuses on Nick and her friends, but I just finished edits for The Forest Queen, a gender-swapped YA retelling of Robin Hood.  That book is set in Esting a few centuries before Nick is born, and it’s a standalone novel – so the idea of ‘safety in standalones’ in terms of publishing has definitely stuck with me.

How close did you feel like you had to stick to the Cinderella story in this sequel? Did any other fairytales or myths help inspire this next chapter in Nicolette’s story?

I felt that the Cinderella story had come to an end in Mechanica, so I didn’t feel tied to it in Venturess except in the way that having gone through that experience informs Nick’s worldview. The idea of inventing one’s own kind of happy ending, one’s own kind of family, was still important to me – maybe even more so in Venturess. But this book isn’t a retelling of any particular myth or tale, the way Mechanica was.

One of my characters does retell a fairy tale in Venturess, though: Talis tells Nick the story of “The Blind Man’s Daughter,” a popular Korean fairy tale. I came across that story in my work for Parabola Magazine, and I fell in love with it right away – and since I was already three-quarters done with Venturess, I was stunned by how neatly it dovetailed with the themes I was trying to explore.

Has the American presidential election changed anything about your writing or the kinds of themes or topics you want to write about?

I try to let my political and ethical ideals come through in my writing without sounding reductive or preachy (and some reviewers would definitely say I’ve failed on the preachiness front!). I finished writing Venturess before the presidential election, but I was still seeing the buildup to it. The book deals with themes of nationalism, imperialism, racism – I hope in a sensitive way.

Living in Ireland during the election definitely changed my political viewpoints and my writing. There are a lot of things that I love and appreciate about America even more since I left four years ago. But the two-party system seems so corrupt on both sides, and so entrenched – and I do think that, with all the problems that Ireland has, having multiple parties and leaders who are chosen based on their policy proposals rather than their public personae and rhetoric is a good thing. Ireland was mainly a two-party system not long ago, and it was through hardship and obvious corruption on both sides that things began to change. That gives me hope for my home country.

I wrote The Forest Queen during and after the election. I try to look at the differences between claiming a certain belief so that you feel virtuous, and actually doing the hard work of contributing to its concrete fulfilment in the world. I try to look at the danger that can come from believing that your country is inherently good even while it does terrible things. I’m not arrogant enough to think I have the answers, but I don’t want to be apathetic about these issues either.

What authors (alive or dead) would you invite on your dream writing retreat and where would you go?

Ooh! Angela Carter, Robin McKinley, Tamora Pierce, Maya Angelou, Edna St. Vincent Millay, Maud Hart Lovelace. And you, seriously, because it’s a travesty that we haven’t seen each other since college. We would go someplace hot and sunny so that I could escape the gray damp Irish summer we’re currently having. I used to visit my grandparents in Vieques each winter, and I remember it so fondly . . . I think I’d take everyone there and we would write on our beach house porches in the morning and then spend the afternoons drinking cocktails and swimming and cackling mischievously about everything. And at night we’d go to the Bio Bay.

Are there any other genres you might want to write someday?

I love writing personal essays for Parabola, and I’d definitely like to try writing some longer form creative nonfiction one day. I have a few non-magical contemporary books in my “work in progress” folder, too. I’d love to write picture books, maybe do some travel writing . . . I’ve found that some of the work I’m most proud of has come out of getting unexpected assignments or prompts, so I’d like to remain open to writing pretty much anything.

What are some of the best books you’ve read lately?

I just finished and loved Wonder by RJ Palacio. It’s heart-wrenching, especially since I read it as a new parent, but it’s such a lovely book. I was completely stunned by Jane Smiley’s A Thousand Acres a few months ago. And I’m currently reading The Invention of Angela Carter, a new biography of my favorite writer. I’ve just started it, but it’s so wonderful to get a fuller understanding of this woman whom I admire so very much.

Thanks for these thoughtful answers Betsy! Let’s make that writers retreat happen ASAP!!!