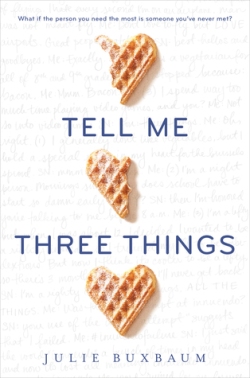 My friend and critique partner, Kristina, gave me Tell Me Three Things by Julie Buxbaum months ago. I mostly liked the cover, but once I started reading it this weekend I liked what was inside the cover even more. Why did I wait so long to actually read this one? Jessie can’t do anything right at her new school. Still grieving the death of her mother, her dad’s married his Internet girlfriend and moved them from Chicago to LA. She’s not blond enough or thin enough. She wears the wrong clothes and didn’t spend the summer hiking mountains in Tanzania or interning at google. And she’s not only alone at school, she’s alone in her new fancy pants house that doesn’t feel anything like a home. Then she gets an anonymous email full of advice. Who to try to befriend. What teachers to avoid. That kind of thing. Thus begins a two month mystery that Jessie desperately wants to solve. Who is the person who’s become her best friend? And could they be more? 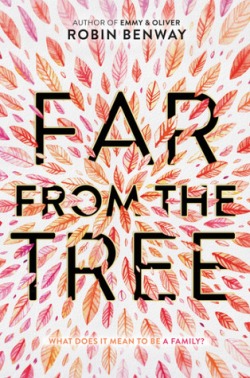 Far From the Tree by Robin Benway won the National Book Award this year, and with good reason. It’s a multi-perspective narrative about three biological siblings who meet for the first time as teenagers. All of them are dealing with their own problems. Grace, who organizes the meeting, has just put her own baby up for adoption and is having to readjust to going back to school without the support of any of her old friends. Maya is falling in love for the first time, but she can’t bring herself to tell her girlfriend about her mom’s alcohol addiction. And Joaquin’s grown up in the foster care system. He’s finally found a family that wants to love him, but he’s not sure he can let them. At first the three don’t seem to have much in common. They don’t even agree on if they should try to find the birth mother who gave them up. But they’ve found each other at the exact right moment. Beautiful voice and writing. And an emotional story that made me cry more than once (okay, more than twice). This book is pretty close to perfection.

On Book Riot I picked Long Way Down by Jason Reynolds as the best book I read in December. And it’s true! So why haven’t I written about it on here yet? This book is something else. It is so big in every way (except page count). Big emotions. Big language. Big concept. Told in verse, the book follows fifteen year old Will on the longest and most important elevator ride of his life. His brother’s just been killed, and Will thinks he knows who did it. The rules Will’s been raised on say he needs to avenge his brother’s murder. But at each floor a new ghost from Will’s past visits to try and talk him out of it. His father. Two brothers. A friend killed at eight on the playground. The story gets bigger and more clear with each visitor, and the message about teenage gun violence is devastating. This book got like a bazillion honors and awards this year. And I can see why. It’s not a long read, but the lyrical poetry and poignant message will stick with you long after you finish reading.

2 thoughts on “Three Mini Reviews: Tell Me Three Things by Julie Buxbaum, Far From the Tree by Robin Benway, & Long Way Down by Jason Reynolds”