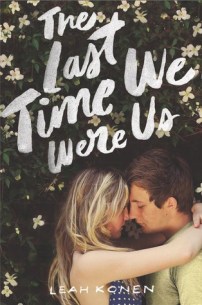 Liz Grant is preparing for the perfect summer. Things are finally supposed to be easy. She’s friends with a new popular crowd. She’s about to become the girlfriend of the richest and most handsome boy in her small North Carolina town. Her sister’s getting married. But then Jason Sullivan gets released from juvie early. They were best friends as children. He ditched her in middle school, then got arrested for attacking and disfiguring the older brother of Liz’s new beau. Liz has never known what to believe about Jason’s arrest, but the rest of the town and her own family have no such qualms. With lots and lots and lots of romance (which obviously is my favorite), this story shows Liz struggling between what she believes to be true and what everyone around her wants.

I was drawn to the book because of the premise, I was totally hooked because of the fantastic feminist undertones woven in and out of the story. Also, of course, the smoochy, swoony scenes didn’t make me like it any less.

But back to the feminism, here are some choice quotes to show what I’m talking about (character names redacted to protect from spoilers…although if you don’t want any hints you should probably stop reading now):

“Sex was a big deal to me. I wanted it not to be, but it was. And even if it wasn’t, I still wouldn’t be a slut. It’s really sexist to think that way.”

“I want to teach her that the whole boyfriend thing isn’t important, that you can be your fabulous self and that’s all you need.”

“[She] looks at me with ‘help me!’ eyes when the boys talk about boy things -or at least what people like [name redacted] would consider boy things – like boats and the Braves.”

And there are many more moments like this. I love having a heroine who is so obviously a feminist, but that doesn’t totally work its way into the plot. Also having it be such a romance with a lot of suspense… It is basically a summer read that felt written exactly for me.

3 thoughts on “The Last Time We Were Us, by Leah Konen”